Recently, after spending time using a friend’s jacuzzi after a long bike ride, I decided I wanted one, too. The only problem is that where I live, it would be prohibitively expensive to keep the jacuzzi water warm all winter long.

But hey, wait a minute, I thought, what about a sauna? I could turn it off and on at will. I know you, like me, wondered about the benefits of a sauna. To answer this question I did a little research.

And, lo, and behold, I need only look as far as the 9/25/2021 edition of the NY Post to see an article entitled “Regular sauna use has many same benefits as exercise: study” outlining some of the benefits of using a sauna. The principal author of this study is Dr. Rhonda P. Patrick, who, coincidently, put out some Youtube videos on the benefits of saunas several years ago. I found her videos informative and very organized. In the end, saunas can’t replace physical exercise, but they complement physical exercise. We now refer to Dr. Patrick as Dr. Sauna. Fits, no?

Dr. Sauna has been sounding the benefits of saunas for many years. Pretty single-mindedly, too, I might add. OK, it borders on fanaticism, but people are stupid and you have to convince them of stuff even if they’ve been used for 1000s of years.

One of the primary benefits of regular saunas (4-7x per week) is the enhancement of Heat Shock Proteins (HSP) According to Patrick and Johnson (in press) regarding the effects of heat stress response:

The hormetic effects of heat stress are facilitated by molecular mechanisms that mitigate protein damage and aggregation and activate endogenous antioxidant, repair, and degradation processes. Many of these responses are also triggered in response to moderate- to vigorous-intensity exercise and include increased expression of heat shock proteins, transcriptional regulators, and pro-and anti-inflammatory factors

I could list out the benefits of HSP, but a picture is worth a thousand words. The upshot is that saunas help you live longer with fewer health-related issues.

A Finnish study followed 2,315 men between the ages of 42 and 60 over the course of 22 years. Death from cardiovascular disease was 50% lower in men who used the sauna 4-7x per week compared to men who only used the sauna once a week. This study used high temperatures averaging 79º C or 174 º F for sessions >= 20 minutes. This temperature is much higher than IR saunas or jacuzzis, so it doesn’t necessarily apply to them.

There are several types of saunas (wouldn’t you know?):

How Saunas Heat You Up

The methods saunas heat you up are different between traditional saunas and infrared saunas. A traditional sauna heats the air around you to a degree that your body kickstarts its natural cooling process. This means bringing blood closer to the surface of the skin and opening the pores to release sweat. This requires higher a higher temperature (150º – 185º F.)

Infrared saunas emit a wavelength of light that your body absorbs without heating up the room around you. This absorption starts that same cooling process without having to steam you in the process. Because it cooks you from the inside, so to speak, it operates at a lower temperature (120º – 140º F) than the traditional sauna. Consequently, because it is cooler, you can spend more time in an IR sauna.

Glad you asked. I immediately looked for a sauna. After ferreting through Craigslist, I came upon the perfect solution, a portable IR sauna (like the one pictured below sans the external unit.)

Yes, you look like a turtle with your head sticking out its shell. But it works. Not satisfied, I wanted to experience a traditional sauna so I bought one of these:

This is a real sauna called a Finnleo PS44 Passport, which has been replaced by the Finnleo Hallmark 44 shown above.)  It’s a few years old with no cellphone app (gasp!!) It is sitting in my garage in 6 pieces (it’s portable and easily assembled) consisting of four walls, a roof, and a floor. It’s 8’x4’x4′ with stereo speakers and a light show! I’m waiting for the electrician to add a non-ground fault circuit interrupter (GFCI) outlet which is a special type of circuit breaker that automatically shuts off the power directly at the outlet when it detects an electrical fault, i.e., you dropped your hair dryer into the tub of water you’re bathing in. Apparently, when my new sauna is turned on it draws a lot of power which trips the aforementioned GFCI. Yikes!

Pros of the portable Sauna

Cons of the portable sauna

Another type of portable sauna is the sleeping bag sauna 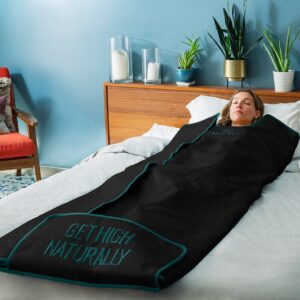 Lest I forget, there’s the infrared sleeping bag sauna.  It’s the same as the other portable sauna, but you can lay down.

I will write more about my adventures in Sauna Land as time permits. But, it looks like Dr. Sauna has convinced me that saunas will be a part of my physical fitness regime from now on. I suggest you look up some of her videos on YouTube. Dr. Sauna’s website, foundmyfitness.com has a free article “Sauna Use: Implications for Aging and the Brain.” This free PDF outlines the benefits of regular saunas. The website also has a bunch of other health-related videos.

I also linked her paper above. In the meantime, happy saunaing!!

Don’t Worry, You Won’t Bulk Up*

To Live a Lot, Sprint Some, Too.

Welcome to my health and fitness blog.  It’s mostly for folks over 40, but anyone is welcome, because some day you may be over 40, too.  Feel free to look around and leave me a comment if you find something interesting.